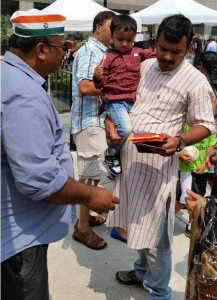 Naya Jeevan, meaning “New Life” in Hindi, is a Cru ministry reaching South Asians ​ in America and abroad.​ One of their key strategies involves outreach at cultural festivals where JESUS Film DVDs and evangelistic literature are freely distributed in ​South Asian​ languages. Imagine touching the lives of 1,000 South Asians with the good news of JESUS in a single day! Such festivals are held all over the US and Canada.

A group called Labourers in Christ, ​who partner with Naya Jeevan, ​conducts outreaches in various cities like Detroit, Toronto, and Chicago.  Here’s a report from Columbus, OH:

We came across some people whose hearts are not yet open to… the good news of salvation. One Gujarati lady told us “We cannot put Bibles in our home although we want to.” …Another man told us that he thinks the Koran and Bible are the same. Although these were not so encouraging, the positive responses have outnumbered them. We have given away around 600 JESUS DVDs, ..600 Bible apps…

For Easter 2014, a Naya Jeevan staff member in Connecticut made arrangements to provide face painting and balloon animals for the children.  He reports: 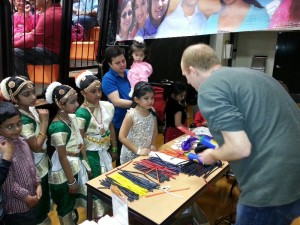 Since we have taken the effort of doing something for the children in festivals, we have had 100% increase in folks viewing our table and voluntarily taking and receiving DVDs, tracts with granola bars, and Bibles in the various South Asian languages. We had a mother ask us, “Why are Christians attending this event when you are ‘against’ this type of religion?” This opened a great conversation and allowed us to put “love your Hindu neighbor” into practice. We explained, “We are not against you or against your faith. We are here to share how God loves you in this time when we celebrate Easter.” She was extremely receptive and took a Bible and DVD.