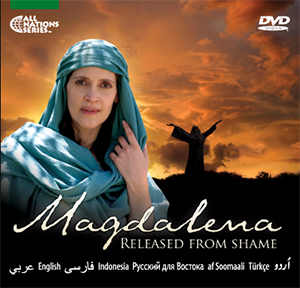 Today, December 8th, many Christians in the US are observing the Feast of the Immaculate Conception. Church services honor Mary and focus on Jesus being conceived without sin. Many works of art depict Mary as a young woman wearing white and blue. She is likely to be pictured on a hill and having a halo of stars around her head.

Christianity values women unlike many other major religions. “Magdalena, Released from Shame” shows enhanced footage from the original 1979 JESUS Film. It also carefully weaves in new footage of the stories of four Biblical women to emphasize Jesus’ compassion toward women. We offer three different 8-language DVDs of Magdalena, each also contains the Story of JESUS for Children (1 DVD / 2 films / 8 languages!):