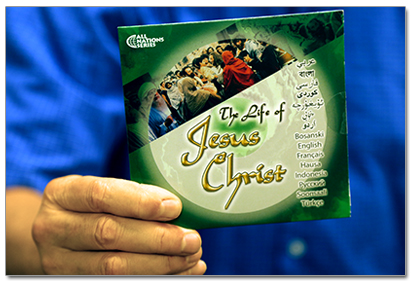 A story from The JESUS Film Project:

Anger boiled up inside Asad* as another man tried to pull into the parking space he wanted. He reacted by physically attacking the man and soon found himself under arrest.

Asad’s jail sentence required him to obtain the consent of his accuser in order to be released. So, he contacted the other man and asked for forgiveness. In response to Asad’s request, the man came to see him, and to Asad’s surprise the man told him, “I forgive you because my Lord has forgiven me.”

“Who is your Lord?” asked Asad. “Go and watch this DVD, and you will find out everything,” the man said as he handed Asad a DVD of the “JESUS” film. Curious and questioning, Asad watched the film. During the crucifixion scene, he heard Jesus say, “Father, forgive them for they do not know what they are doing.” This declaration stirred his heart, and he recognized that Jesus Christ was the Lord of the man he attacked. Asad prayed the prayer at the end of the film, receiving Christ, and from that moment his life completely changed. He joined a house church and began growing in his new faith.

Because Christianity is illegal in his home country, Asad attended a Home Church Leader conference in a neighboring country where he received training in church ministry and in the use of JESUS Film® tools. Today he uses “JESUS” for evangelism. Asad has dedicated his tithes to buying DVD duplication equipment in order to supply copies of “JESUS” so more people can be reached with the gospel just like he was.