What are some ways I can use and share Jesus Film® media?

Suppose you have neighbors or coworkers who are from another country. You could offer him or her a JESUS film DVD, such as the “American Cities” DVD, which has the film in 24 of the most commonly spoken immigrant languages in America. You could say, “May I give you a gift? It’s in your heart language.” And as your friends see their languages listed, I can just about guarantee you that their eyes will light up with excitement! Offering a DVD also works well for that clerk at the store who has an accent, or a waiter at your favorite Chinese restaurant, or the lady from Vietnam who does your hair—or anyone, really! You can order the “American Cities” and other multi-language DVDs at: 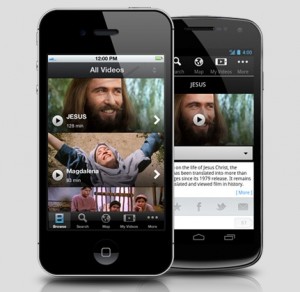 Let’s say you’ve met someone who has come to our shores from another country—a refugee, an immigrant, a tourist, an international student—but you don’t have a DVD handy. No problem; you can use your iPhone! The Jesus Film app is available for your smartphone or tablet at your app store or JESUS Film app webpage. You can show your new friend a couple minutes of the film in his or her heart language, and then ask if they would like you to email them the link to watch the rest of it. JESUS can be viewed or downloaded in nearly 1500 languages. The women’s version, “Magdalena,” and the children’s version, plus discipleship series and many short clips designed to spark evangelistic conversations are also found through the app or directly at our JESUS Film watch webpage. 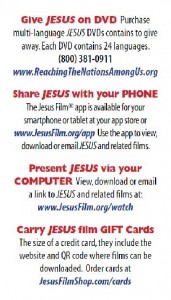 You’ve just finished a fine dinner, and along with a nice tip, you can leave your waiter a JESUS film gift card as an extra thank-you. Resembling other gift cards, this is designed to pique the curiosity of the receiver to go online and watch (or download) the film. It can also be offered to friends, neighbors, store clerks, doctors, hair stylists, repairmen, etc. A pack of 100 JESUS gift cards can be ordered for $10 at JESUS Film Shop. 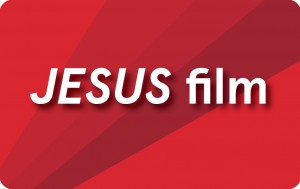 Give the red  gift card above to interested non-Christian friends

Use the information card to the right to tell Christian friends how to share the JESUS film.

***special thanks to our team member, Don Dearing, for providing this content***